No offense to Microsoft® Visio, I think the whiteboards and dry-erase markers are boon for the IT industry. One can use them to their advantage before diving into the technical formalization of the processes. The idea is not new; decades ago, I recall senior management folks used to take notes on paper napkins during a business meeting at some fancy restaurant. I am sure they still do. 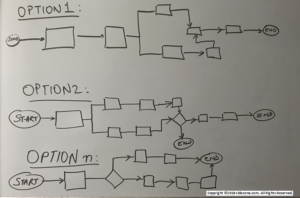 Consider a situation, where a client or someone from the client’s team acting as a representative of the client approached the development team with a pretty color-coded printout of a Microsoft® Visio diagram representing process flow with multiple swimlanes, along with technical details identified in it. Asking them, “Take a look, and let us know what you think.” And they expect an answer, like, “Wow! What an excellent job you all did! It is all clear. We will get on it right away. Will be done.”

Just to make it clear for some folks who may not have caught the sarcasm, neither was the development team invited, nor the development team was part of those sessions where the customer and other teams cooked up that Microsoft® Visio diagram. Someone somewhere in the cross-matrix corporate food chain decided on behalf of the development team without their presence. On a stretch, one can draw conceptual parallels that might have happened during the “Taxation Without Representation” American Revolution!

In other words, the client has a problem (or business case that needs a solution), which they already identified, defined, solved and came up with a technical solution for, all by themselves.  Now, all they need is the development team to make it happen. Simple!

If the development team provides feedback that something needs discussion, the response they get in return, like, “Oh! Now, it’s too late. We already presented this [pointing to the Visio diagram] to the board, maybe next time we can make that improvement.”

The result, either the project would fail due to lack of transparency, or the outcome would be different than the expectations, again, due to the lack of proper communication and false assumptions. One can argue, run the daily scrums to discuss and report all the issues, which, of course, is a tool to reduce the risk. However, there is not much one can do if the false assumptions and lack of knowledge are the basis for the framework of the solution under which the development team is operating.

Here are a few steps teams can consider mitigating such failures, including, but not limited to:

Once a project failed or turned red on a project plan, practically, there is no point in getting into the bickering and pointing figures that the client signed off on the requirements and acceptance testing, etc. Like it or not, the development team has to swallow the pride, take the blame, and do the needful in the team spirit to bring the project back on track.

Learn from such experiences, and take steps to mitigate and alleviate such situations in future – starting with going back to the drawing (white) board!

Comments are closed.
Tweets by iamsidka